Is Plastic Surgery Really Cheaper in South Korea? If So, Is it Worth the Trip?

When we talk about plastic surgery, it’s usually the roof party somewhere in Beverly Hills we imagine, or the perfect beach body getting out of a brand new Porsche in Palm beach. Plastic and cosmetic surgery have long been considered an American symbol, something rooted in its culture of showmanship and appetite so deeply it’s almost a tradition. And yet, more than 1.4 million Americans fly thousands of miles each year to countries as close as Mexico and as distant as Japan to have their aesthetic procedures done. It is estimated that on average, you can save from 40 to 80 percent on the procedures abroad. Recently, South Korea has emerged as the plastic surgery capital of the world, with the highest number of procedures carried out per capita. While the aesthetic adjustments are highly popular among Koreans themselves, the reputation has sparked international curiosity, too, and tens of thousands of foreigners each year travel to the country with a sole purpose of going under the knife. For some, it’s the overarching K-pop culture that drives them here; after all, who is better at turning you into a Korean pop star than the surgeons who’ve worked with the stars themselves? For others, medical tourism is about adventure; going through the procedures isn’t really fun, so you might as well try and add some joy into the mix. Most medical tourists, however, are motivated by money. There is an unofficial consensus among that last group that plastic surgery procedures are cheaper in any country that is not the U.S. It is true, for the most part—on paper. Let’s take a look at the actual prices of different plastic surgery procedures in the U.S. versus South Korea (data taken from this website and WebMD): 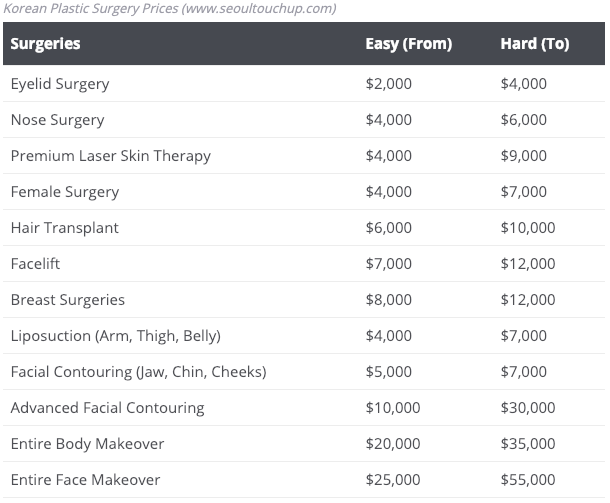 These are, of course, ballpark figures. The actual prices quoted to you by your surgeon may vary significantly from these averages. But the numbers do tell us something. According to these, if there is a price difference between U.S. plastic surgeries and South Korean ones, it is definitely not large enough to call the decision a “no-brainer.” Why then so many people are still keen on flying to the other side of the world to do something they can do at home?

There are several widespread misconceptions about plastic surgeons in Korea. To save you a lot of time, money and nerves, we’d like to shed some light on the matter.

If there’s one thing that South Korean plastic surgeon practices are undeniably good at, it’s marketing. Google “before and after” photos from our South Korean colleagues, and you’ll see dozens of unbelievable transformations. Most of those photos look like they feature two different people. In the mind of an unsuspecting prospect, this can very well appear as a sign of the surgeon’s qualifications. One might easily think, “if he can do that, he can definitely fix me up, too.” However, this train of thought can lead to very misleading conclusions. The number one reason why South Korean plastic surgery photos look so stunning is because the magnitude of changes requested by the patients in those photos was extremely large. In fact, the finesse of a surgeon’s execution is much more observable with small, delicate changes, rather than complete makeovers. Big changes trick the eye into missing the details. The reality for most plastic surgery patients is that they don’t want big makeovers or drastic transformations. In all honesty, many patients don’t want anyone to know they’ve made the decision to go under the knife. They want their family and friends to appreciate their natural beauty, rather than see their new looks as artificial adjustments. Fact #1: There are good and bad plastic surgeons in both the U.S. and South Korea. There are surgeons and practices that will understand what you want and will make you feel confident enough to trust your procedures with them, and there are the ones who won’t. What the online pictures reflect is evidence of marketing skill, not plastic surgery qualifications.

Myth #2: A trip and a surgery? Two birds with one stone!

Many patients who will eek out lower-priced offers from ‘exotic’ Korean surgery practices think that the price difference will make up for the traveling and accommodation expenses, effectively making it a 2-in-1 offer. Who doesn’t want a South Korea trip to go along with their surgery offer? While the price tag might make sense, the reality of having surgery in a distant foreign country is anything but pleasant or exciting. Fact #2: Post-op recovery is not fun, especially in a foreign country. If you’re motivated enough to go to Korea to have your plastic surgery procedure done, chances are you’re going for something a little more major than a quick skin rejuvenation therapy. Invasive procedures and the anaesthesia used during the surgery always leaves patients slightly disoriented after the procedure. The minimal recovery time for most major operations (eyelid surgery, facelift surgery, breast augmentation/reduction, liposuction, abdominoplasty) is 5-7 days—that’s the minimum time period before you’ll feel comfortable going out of your room. Naturally, 18-hour flights are not ideal for your recovery regimen. This leaves you with one choice: stay in your hotel room until you’ve at least partially recovered. Unless you have a place to stay at, that is. Normally, home care is strongly advised after the surgery. Some patients will take the whole experience better, while others will be more affected, but it always does leave patients in a state of increased vulnerability. To avoid serious trouble and inconvenience, we always recommend our patients to postpone any major events for at least 2 weeks after the surgery. Bottom line is, if you truly hope to enjoy your plastic surgery tourism adventure, it should be at least a month long. Otherwise, you’ll simply spend your time being cared for in your hotel bed. Or—even worse—try to do it all yourself in a foreign country, after the surgery. b>Fact #3: you always want to be able to contact your surgeon after going under the knife. Should you experience any complications, it is the original surgeon you want to call first. They will best know how they’ve altered your body and will be in a prime position to help you out. That’s why it might not be the best idea to have surgery on the other side of the world.

Myth #3: The whole process is extremely smooth in Korea

People who’re seriously considering going to South Korea for beauty enhancements are usually the ones who’ve seen one of many videos and articles on the Internet that supposedly describe their whole journey. While there are many outstanding plastic surgery practices in the country, don’t trust everything you see on the Internet. These videos are often closely curated by marketing specialists who make sure that no negative experiences make it to the final version of the content. Fact #4: There are several ways your plastic surgery trip can go wrong, and it all begins with the language barrier. According to this anonymous testimonial, it is common for Korean plastic surgeons to not speak English. The communication then happens through a designated translator—who is often simply the practice’s administrative employee who speaks some English. Of course, the final decision is always yours, but would you allow a chance of your plastic surgeon not understanding exactly what you want? Or them not being able to clearly communicate the risks and side-effects of the surgery? A decision of this magnitude should never be communicated through a foreign language filter. Fact #5: It is not a secret that the plastic surgery culture in South Korea is different from that in the U.S. Here, we try to build trust and confidence with our patients through one-on-one conversations, careful planning, customized treatment plans, follow-ups and other personalized care. The whole service package may cost more, but we see the process from the beginning through the end. In Korea, apparently, not all clinics adhere to this philosophy. With the massive demand for surgeries, many practices take on a productivity-focused approach, more characteristic to manufacturers rather than surgeons. With multiple surgeries performed every day, the patients are shuffled around the clinic as if they’re half-baked goods on a production line, rather being treated as human beings in their most vulnerable states. Fact #6: Medical tourists are still, in many ways, tourists. More often than not, they are not familiar with the local language, customs, and, most importantly, the prices. Several testimonials have reported that the prices for surgical and non-surgical procedures are almost never quoted on the tourist-oriented websites, and often the price quotes given to foreigners exceed the expected market price. To avoid getting ripped off, read the following section.

If You Do Decide to Go, Here are a Few Tips

Naturally, some of our readers will not be dissuaded by the arguments provided here and will seek plastic surgery care in the exotic South Korea. Perhaps you have a unique reason for pursuing this endeavor—a reason strong enough so that the counter-arguments in this article fade into the background. In either scenario, here are a few tips and suggestions that could go a long way in making your plastic surgery trip less stressful:

Summing It Up: Is It Worth the Effort?

While having surgery in a country as distant as South Korea might seem like a lucrative option finance-wise (even though the prices are pretty even across the board), it is hardly worth it. If you’ve been jaded with the “before-and-after” pictures you’ve seen online, don’t be. The magnitude of the operation is a very weak indicator of the surgeon’s qualifications; in fact, the contrary may be true—a drastic change might mean the surgeon failed to give the patient adjustments that enhance their natural beauty. If you think that the trip might be fun and the price discrepancy will ‘pay for’ your entire flight and stay, then you need to seriously reconsider. Unless you have a permanent place to stay in the country, your South Korea adventure may very well turn into a week-long post-op nap in your hotel room. Sightseeing and exiting your room, in general, is not what you’ll want to be doing 5-7 days after the surgery. Lastly, don’t be fooled by the ‘my plastic surgery journey in Korea’ videos. These content pieces are often sponsored by the clinics themselves, and often leave out negative experiences caused by the language barrier and the manufacturing culture of Korean plastic surgery practices.
Is Plastic Surgery Really Cheaper in South Korea? If So, Is it Worth the Trip?2018-12-212019-10-18https://www.aristocratps.com/wp-content/uploads/2021/03/aps-logo-updated-1.pngAristocrat Plastic Surgeryhttps://www.aristocratps.com/wp-content/uploads/2018/12/drimenaim-1141477-unsplash.jpg200px200px
About
Aristocrat Plastic Surgery
Reserve Your Consultation
Welcome